The first Kick Ass, for me, was entirely unexpected.  I knew nothing about the comic upon which the film was based and was joyfully surprised by the film’s wit and brutally over-the-top violence.  It was a breath of fresh air in the world of comic book films that are trying to be grittier or more realistic in the wake of Chris Nolan’s Batman flicks.  It was a terrifically fun romp and I was anxious for more.

Enter Kick Ass 2 – the bigger budget sequel to one of the most fun superhero flicks that seeks to outdo its predecessor.  While I can’t say that the film succeeds in its ambitions, it certainly puts up a good effort.

Kick Ass 2 begins two years after the first movie ended.  Chris D’Amico is an emotionally unstable manchild who is pissed at Kick Ass.  Meanwhile, masked vigilantes inspired by Kick Ass are taking to the streets to help those in need; whether it’s feeding the hungry or busting up an illegal poker game run by human traffickers.  Kick Ass himself, however, isn’t present in this group of heroes – no, he gave up vigilantism in favor of living a boring teenage life.  Leading this masked band of misfits, calling themselves Justice Forever, is Colonel Stars and Stripes.

Amidst all the heroics, the film gets lost in some high school drama and heavy-handed character development.  While I’m fully aware that character development is necessary for driving the story, the primary players have already had their backgrounds and personalities laid out in the first film.  The sequel sees them straying away from the character traits you’re expecting and often abandons the high quality wit of the first in favor of a more realistic or even cliched scenario. 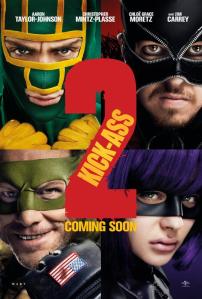 Tonally, the film fails to hold up the high energy of the original.  It still has its moments where it shines, but it attempts to be darker and more serious than the first film.  While this isn’t necessarily a bad thing, it wasn’t entirely expected.  Going in knowing that Jim Carrey had a starring role – even having his image and name billed on posters – I was expecting more on the comedic side.  While he certainly fills the role well, I can’t help but feel he was under utilized.  There’s one scene in particular where Jim Carrey shined as Col. Stars and Stripes, but the character didn’t really feel like it took advantage of him and his abilities.

The film’s climax was disappointing to me and, I feel, it didn’t really live up to the buildup, but even with its flaws, the film is full of energy and has some great action.  Some of the high school drama feels over done and unnecessary, but there was always something unexpected and thrilling making up for the films lulls.  It’s a fun film that doesn’t quite live up to its predecessor, but it’s still well worth sitting through.