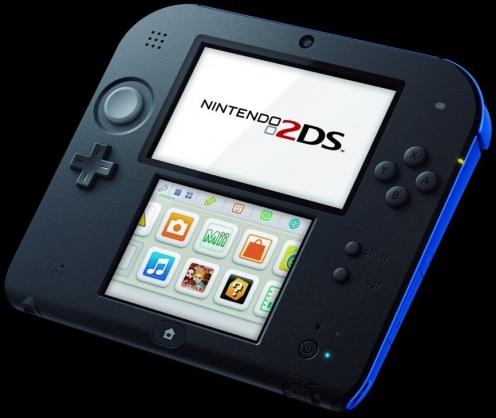 Gamer’s looking to experience Nintendo’s new handheld library (like the upcoming Pokemon X and Y), but unable (or unwilling) to shell out the cash for a 3DS will be happy to hear that Nintendo is releasing a cheaper alternative.  Dubbed the 2DS, this new hardware will allow gamers to play classic DS and 3DS games at the lower entry fee of $130.  The system doesn’t have the clam shell design of DS systems past and doesn’t have a 3D display, but does offer the capability to play games made for the 3DS without the risk of eyestrain.

It’s no doubt this new entry in the DS family will confuse consumers (and more than likely disappoint eager children this holiday season), but it’s, in my opinion, a needed move by Nintendo to try to expand the 3DS user base.  Having a cheaper system out there will drive up hardware revenue and have a positive impact on attach rate as well as boost the sales of the system’s upcoming killer app – the aforementioned Pokemon games.

Because I love me some Pokémon, I’m going to post this new gameplay trailer.  You’re welcome.

I know I’m a little behind on the Nintendo Direct stuff, but I’m a busy guy.  Not really, but that’s the excuse I’m sticking with.

In their ND E3 conference, they unveiled a new trailer for the upcoming Pokemon X & Y versions that showed off the games’ new fairy type.  The type will be strong against dragon type Pokemon, an update Game Freak hopes will help bring a little more balance to their monster collection/fighting games.

In addition to the new Pokemon type is a new mode in the game called “Pokemon-Amie” which makes virtual pets out of your Pokemon.  You’ll be able to bond with your pocket monsters Nintendogs style by feeding them, petting them, and even mimicking them with your movements captured by the 3DS’ front-facing camera.  I’ve never really been big about all the features they’ve added over the years that are like the talent show and even the Dream World, but this seems like something I’ll totally spend some time with.  It seems much more worthwhile than dressing your Pokemon up for scripted stageplays.  What I’m saying is, I love catching and leveling Pokemon, I hate dressing them up, but I’ll totally pet the shit out of them.