I can’t really label this a review since I haven’t completed the game yet and don’t really have a fully formulated opinion of it.  But, I have spent several hours with the console release (specifically the Xbox 360 version) of Diablo III and have some thoughts I’d like to put down on digital paper.  The game is over a year old on PCs now and so it doesn’t really warrant a review in that sense.  It’s Diablo – the king of dungeon crawlers.  It’s awesome.  Yada yada.  But how does it play on consoles?

Pretty great, actually.  Honestly, for several years now I’ve been favoring console dungeon crawlers over their PC counterparts.  There’s not always a whole lot of ports, but since the days of the Dreamcast, I’ve been doing most of my killing and looting with a controller in hand.  This isn’t to spark a PC vs. Consoles debate, this is just my preference (and you’d damn well better respect my preference).  PC gamers tend to have a bit of apprehension when it comes to ports of their beloved mouse and keyboard exclusives.  Sometimes they’re right to be worried (typically, real-time strategy games (RTS) don’t translate well to console controls), but sometimes their apprehension is unfounded.  Thankfully that’s the case with Diablo III. 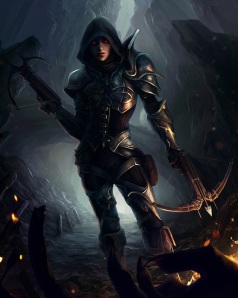 Personally, I wasn’t worried about the transition.  I had enjoyed Torchlight immensely in its console release (and sincerely hope that its sequel gets some new life on consoles) and knew that Bilzzard was more than capable of delivering a high-quality port.  They did, too.

I think the biggest selling point for me on the console version is the couch co-op.  I can be old school at times and so I’d much rather be playing a game with my friends in the same room as me than as disembodied voices over the internet.  It’s a much more enjoyable experience.  That being said, killing, questing, and looting is so much more rewarding to me when I can sit back on the couch and maybe throw back a couple of drinks with my pals while making clever or not-so-clever quips.  It’s great to have that social interaction mixed in with my favorite hobby.  It also helps that the translation to consoles didn’t affect the fun factor of Diablo.

It would be insulting to say that there’s not much to the game on PC, but in playing games like Diablo it has a missing sense of control.  With playing the game with a controller in hand, I feel much more like I’m playing a game.  My character moves where I’m leading him and reacts to my every move – I’m not just telling him what to do and he follows my commands; I’m given a much greater sense of control.  That is what I like about playing Diablo III on my console.  Does the console version have its drawbacks?  Sure.  It’s not perfect, but it offers to me as a gamer more of what I’m looking for in a game than the PC version does.

The biggest disappointment I have with Diablo III is less of something the game did wrong and more of a hugely missed opportunity.  Couch co-op is great.  I love sitting with my pals and playing this game on the same screen.  However, sharing the screen during inventory management sessions sucks.  Only one player at a time can view his or her inventory or have any interactions with merchants.  This breaks the flow of the game and results in several sessions of checking facebook or playing games on your phone while you wait for your pals to finish up their shopping, crafting, and customizing.  This is something that could have been easily remedied with SmartGlass.  Let’s say that you’ve got 3 friends over and you’re all looking to score some epic loot.  Well, while Johnny McSlowshopper is browsing the shops, you can connect with SmartGlass and interact with a shop keep or examine and manage your inventory on your phone while the television is occupied with someone else’s menu.  This would have been a great solution in keeping the game moving at all times rather than making every trip to town a 20+ minute ordeal because you have to take turns managing your inventory.  With that said, it’s a relatively minor complaint.  It’s not a broken gameplay mechanic or a fatal flaw in the game, it’s just a painfully missed opportunity.

Diablo III on the console is a blast.  It’s pretty much everything you can expect from a Diablo game while giving you a little bit more joy with couch co-op.  It’s a welcome addition to my gaming library and I’m sure I’m going to sink many, many hours into its loot-filled world.

Diablo III is currently available on PC, Xbox 360, and PS3.  A PS4 release is planned and in development. 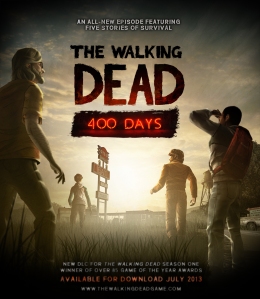 The next episode in Telltale’s award winning The Walking Dead game is subtitled 400 Days and will be heading to pretty much everything this summer.  Choices players made in previous episodes will carry over into the new game which will feature five new characters in their very own stories.  Telltale suggested that some of the characters the player meets in 400 Days might show up in Season Two with all the choices they make in the new episode also impacting that storyline.

On Wednesday, February 20, 2013, Sony finally revealed their next videogame console:  the PlayStation 4.  While there had been a lot of speculation leading up to the event, it’s nice to finally have some details confirmed and, after seven years, we can look forward to a new console gaming generation this fall.

Here’s a brief rundown of the system:  The PS4’s new controller will feature a touch pad, a light bar which can indicate character health as well as act as work in tandem with PlayStation Eye (similar to PS Motion), has redesigned analogue sticks with concave grips, and a new “social” button which opens up a social menu.  The PlayStation Eye has also been vastly improved and now features two cameras with 1200 x 800 resolution–the two cameras allow depth recognition.

The system itself is equipped with a “powerful custom chip that contains eight x86-64 cores and a state of the art graphics processor.”  The PS4 also has 8 gigs of GDDR5 memory allowing 176GB per second bandwidth and higher graphic fidelity.

Games announced for the PlayStation 4 include a new title in the inFamous series titled Second Son, Killzone: Shadow Fall, Bungie’s Destiny with exclusive content, The Witcher 3, Ubisoft’s Watch_Dogs (which was announced at E3 2012), Diablo III (which will also make an appearance on the PS3 for the eager, console-bound dungeon adventurers), among others.  The upcoming content seems to be a strong lineup, but there’s little new content to entice potential buyers at this early stage–E3 is likely to bring more exciting news on the next PlayStation.

It’s also worth noting that the PS4 will play used games, contradicting past rumors that the system would block the use of pre-owned titles.  The PS4 will not, however, be backwards compatible and past PSN purchases on previous platforms will not be accessible on the new system.  While Sony plans to circumvent the backwards compatibility issue with a streaming service, the lack of any native support for older titles is discouraging.

Nevertheless, the PlayStation 4 looks to be a powerful gaming machine and it’s certainly exciting to move on to a new generation of console gaming hardware this holiday season.