The more I see of this game, the more excited I get for it… and I’m really damn excited.  This trailer shows off the seedy human trafficking side of the fictional Chicago.  Crazy stuff ensues.  Just watch.

Sonic: Lost Worlds is heading exclusively to Nintendo consoles later this year.  It follows the announcement of an exclusive Sonic deal between Sega and Nintendo; Lost Worlds is first game in that partnership and it now has a trailer.  Fans of Sonic games may see some Sonic Xtreme DNA in this upcoming title–Sonic Xtreme was the canceled 3D Sonic game for Sega’s short-lived Saturn. 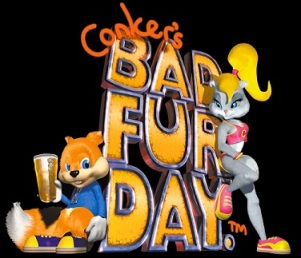 Chirs Seavor is apparently working on a game for Nintendo’s WiiU.  With all the buzz surrounding Microsoft and Sony’s next gen consoles circulating the web, it’s nice to see that Nintendo’s console hasn’t been forgotten.  Seavor served as Rare’s project lead on Conker’s Bad Fur Day and has since gone on to start his own indie studio dubbed Gory Details.  Seavor teased on his Twitter that Gory Details will be needing some WiiU dev kits and promised some gameplay footage in the coming weeks.

Christmas Eve.  Two years after the birth of The Bat.  It’s safe to assume that Bats survives the night (given that this is a prequel to Arkham Asylum and Arkham City), but it looks to be one hell of a night.

The angriest gamer you’ve ever heard is getting his own video game adventure!  Titled Angry Video Game Nerd Adventures and planned for release on PC through Steam, this retro-styled action platformer is also heading, appropriately, to Nintendo’s most recent consoles:  the WiiU and 3DS.  James Rolfe, the man behind the Nerd, got his start as the Angry Nintendo Nerd with his review of Teenage Mutant Ninja Turtles for the NES.

No word on whether or not the game will be coming to XBLA or PSN, but I’m sure we’re all keeping our fingers crossed that no matter what platform this lands on, hopefully it’s not a steaming pile of donkey dung smothered in skunk anuses.

Upcoming Ubisoft sequel to the long-running Splinter Cell franchise is bringing back the popular Spies Vs. Mercs multiplayer mode which was disappointingly absent from Sam Fisher’s last outing.  Fans of the franchise have something to rejoice about amidst their complaints about the disappointing lack of  Michael Ironside (which, granted, is a very valid complaint).

It’s been over a decade since Silicon Knights released the highly regarded GameCube exclusive Eternal Darkness.  Since then, fans of the game have been demanding a sequel.  Silicon Knights and Nintendo ignored these demands and went on about their business.  Since its release in 2002, Silicon Knights has developed the critically and commercially disappointing Too Human and X-Men Destiny.  The studio has been troubled with bad press all around including these critical disappointments as well as law suits and former employee complaints.  Needless to say, it hasn’t been a good few years for Silicon Knights.

Nevertheless, we’re expecting a spiritual successor to their horror classic.  Though the teaser posted on IGN and the game’s official website have no mention of Silicon Knights, it is clearly stated that the game is in development from the creators of Eternal Darkness.  Titled Shadow of the Eternals, this pseudo-sequel is in development at Precursor Games, a new development studio and likely the result of Silicon Knights’ troubled past.  Denis Dyack is said to be involved in the project.

Shadow of the Eternals is being crowdfunded with the campaign beginning on May 6.  It is in development for WiiU and PC currently.  A synopsis of the game and the trailer are below:

When Detective Paul Becker is called to one of the bloodiest gang massacres in Louisiana state history, only two survivors remain from a brutal conflict between two rival cults. As Becker begins his interrogations of the suspects, their combined recollections will uncover the truth about the ‘Eternals’.

Featuring an ensemble cast of heroes and villains, Shadow of the Eternals will span over 2500 years of history throughout Egypt, England, Hungary, and the United States. Players will question the perception of reality as they try to balance the mechanics of combat, magick, and sanity events to progress through the adventure.

Shadow of the Eternals will take players on a memorable journey throughout time; weaving historical fact with disturbing fiction to create an experience unlike any other.

Ubisoft’s upcoming Watch_Dogs has a new trailer and a concrete release date.  Announced at last year’s E3, Watch_Dog places gamers in the shoes of the technically-inclined vigilante Aiden Pearce who can hack electronic devices to gain information, wire funds, or trigger traps in an open-world game environment.  Watch_Dogs will be available on current and next-gen consoles as well as PC on November 19, 2013.

It’s official:  a prequel to the Arkham games has been announced.  The game is set to take place before both Arkham Assylum and Arkham City and is being developed by Warner Bros. Montreal.  The first two installments of the franchise were developed by Rocksteady Games.  This change shouldn’t drastically change the property as WB Montreal is familiar with the Arkham franchise having ported Arkham City to the WiiU.  Batman: Arkham Origins will be released on current-gen home consoles and PC on October 25, 2013.

In addition to Arkham Origins, an additional prequel game is being developed for 3DS and Vita.  Titled Batman: Arkham Origins Blackgate, this portable entry in the franchise will take place after the events of its home console counterpart.  Blackgate is being developed by Armature Studios, which was formed by staff from Nintendo’s Retro Studio (developer of the Metroid Prime series and Donkey Kong Country Returns).  The game will be a 2.5D Metroid-vania style game and is set to release alongside Arkham Origins.